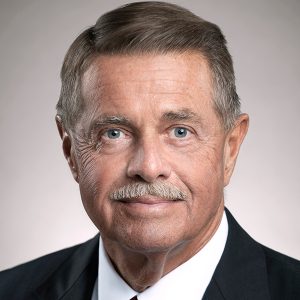 John “Ed” Boyington, Jr. was named President and CEO of Vertex Aerospace, LLC in June 2018. From 2015 to 2018, he served as President of L-3 Vertex Aerospace where he was responsible for the successful execution of a complex portfolio of aviation programs with a global reach across a broad customer base.

Retiring as a U.S. Navy Rear Admiral, he held numerous positions of leadership throughout his military career, including Squadron Commands and Chief Systems Engineer for Patrol and Reconnaissance Aircraft, Naval Air Systems Command. Mr. Boyington’s distinguished Flag Officer assignments include Chief of Naval Air Training, an organization comprised of over 1,150 aircraft and 17,000 personnel, where he was responsible for all undergraduate and graduate aviation training for the U.S. Navy, Marine Corps, Coast Guard, foreign military, and shared joint Air Force training. Other flag commands include Commander of Navy Region South, Commander of Mine Warfare Command composed of 26 ships and two helicopter squadrons, Commander of Iceland Defense Force, NATO Commander of Iceland, and Commander of Patrol and Reconnaissance Forces Atlantic. His additional major command positions include Commander of Patrol Wing One (Japan), CTF-72, and CTF-57 (Persian Gulf).

Mr. Boyington is a rated Army helicopter pilot, a dual-rated Naval Aviator, and an Experimental Test Pilot with over 8,500 hours in 92 different aircraft, including over 600 armed combat missions. His numerous awards include the Navy Distinguished Service Medal, Bronze Star (V), 26 Air Medals (V), and The Order of the Falcon with Commanders Cross presented by the president of Iceland.

He earned a bachelor’s degree from the University of West Florida, a Master of Science in Aeronautical Engineering from the Naval Post Graduate School, and a Master of Science in National Resource Management from the Industrial College of the Armed Forces. Mr. Boyington is a graduate of the Naval Test Pilot School, DSMC Program Manager, Sr. Executive Program Managers courses, a DoD Designated Level 3 Acquisition Professional, and a UWF Distinguished Alumni.

Back to Leadership Explore Careers